This time, we will introduce the icefall of Takiyama Otaki in Yamagata City’s Zao area.
The frozen waterfall is like an ice palace, as if time had stopped, a fantastic landscape that you can only see in winter.

It has often been featured in the media in recent years as a powerful ice waterfall in Yamagata Prefecture.

Yamagata Prefecture is actually a waterfall kingdom known to those in the know.
In fact, it is said to be the number one in Japan.

The spectacular waterfall, combined with the negative ion effect, is a healing spot in the summer.
However, not only that, but in winter, various weather conditions can turn a waterfall into a splendid icefall.

Among them, the three ice waterfalls that have become particularly popular in recent years are Senninzawa Ice Garden (Kaminoyama City), Tamadare Waterfall (Sakata City), and Takiyama Otaki, which we will introduce this time.

Tamasudare Falls is said to have been discovered and named by Kobo Daishi about 1200 years ago.
This spectacular waterfall with a height of 63m and a width of 5m is a beautiful icefall with splashes and freezing in winter. 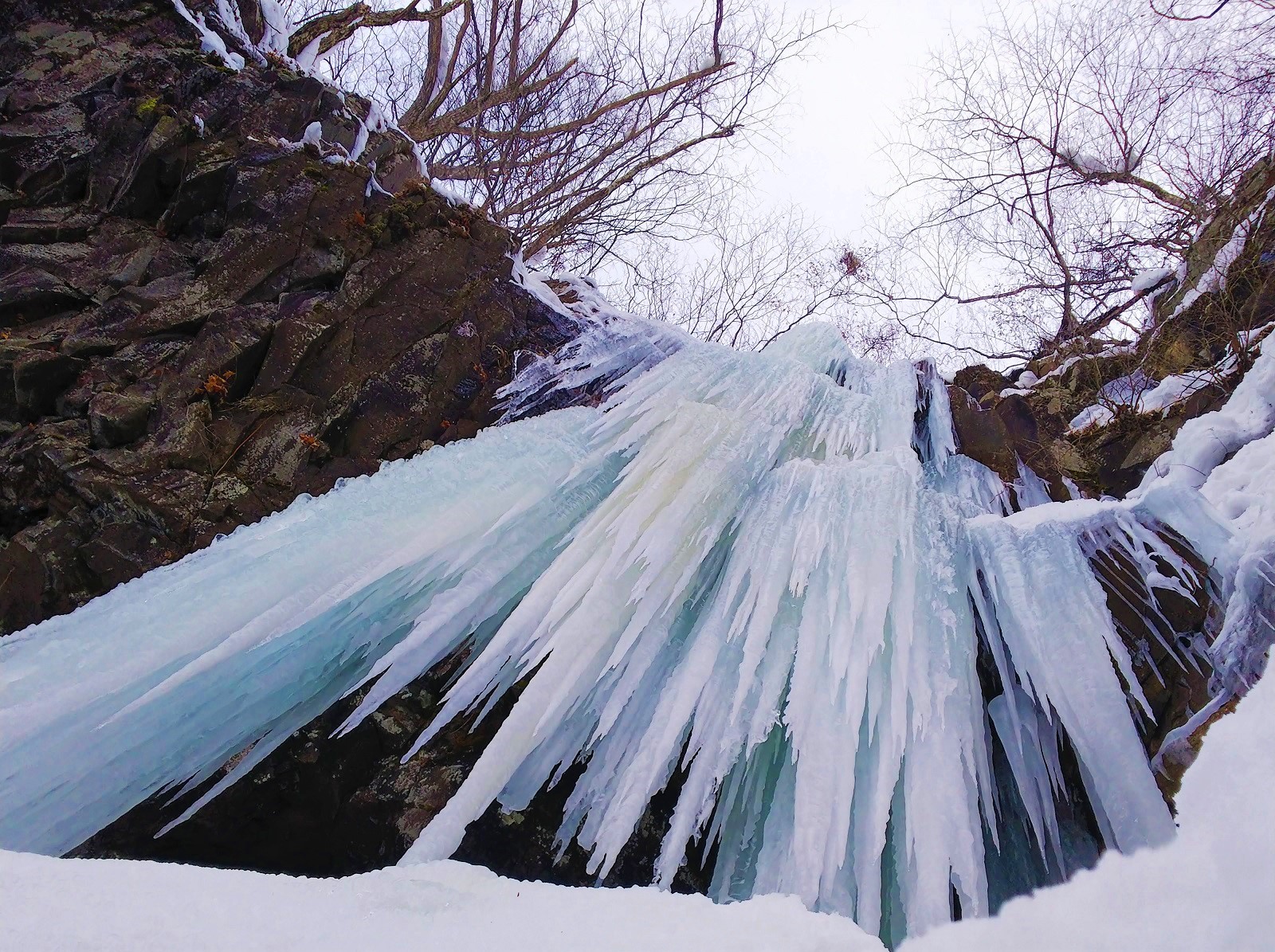 This time we introduce Takiyama Otaki.
It is a popular ice waterfall on the hillside of Mt. Takiyama, which is located in the southeast of Yamagata City.

Mt. Takiyama is the closest mountain to Yamagata City among the mountains of the Zao mountain range. 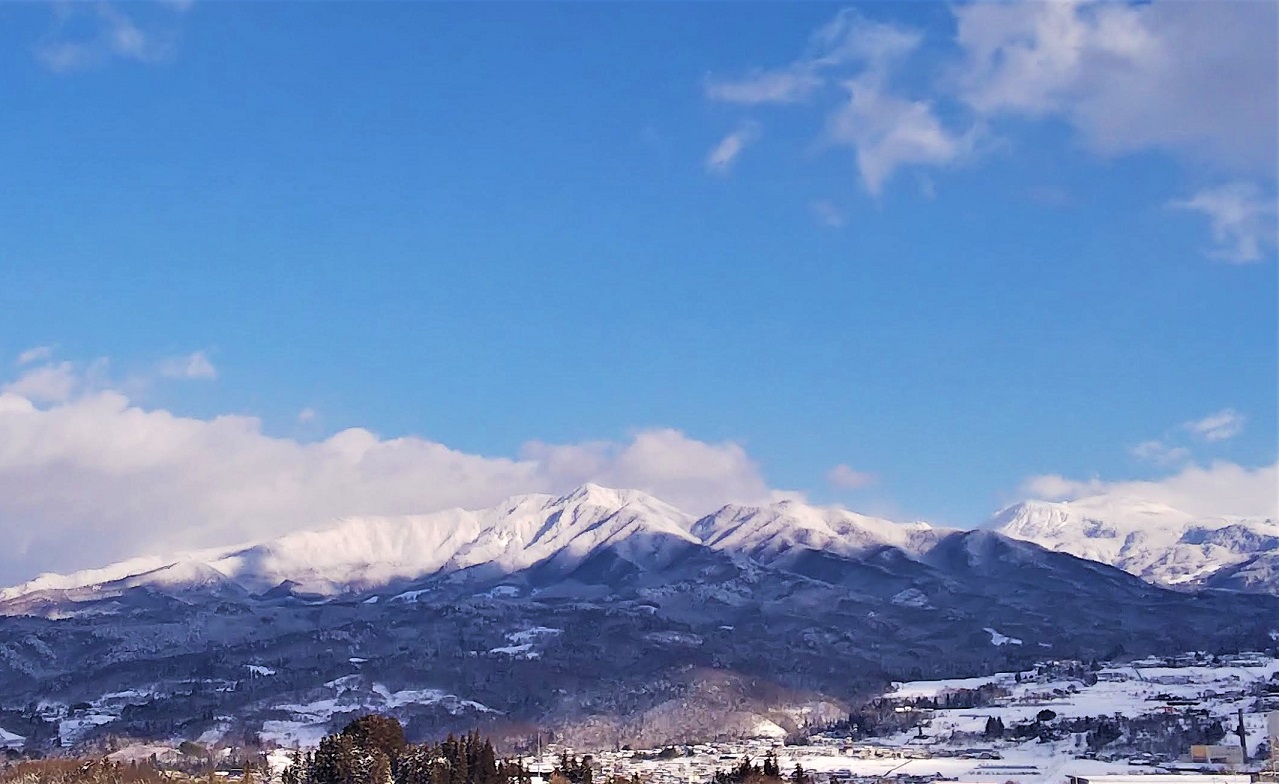 The altitude is 1362m.
You can see its magnificent view from everywhere in Yamagata City, and from the top of the mountain you can enjoy the view of the Zao mountain range and the Yamagata Basin.

It takes about 30 minutes by car from Yamagata Station to the starting point of the Takiyama course.
At the entrance to the West Zao Ranch near the starting point, there is a parking lot for about 7 cars.
* Saturdays and Sundays are busy.

Please note that the road is narrow about 3km just before the West Zao Ranch.

By the way, there is no toilet, so keep that in mind before going out.

I visited in mid-January, so there was a lot of snow, and because many people were climbing, there were footprints and it was slippery.

・ Junction at the Gargling Ground

After walking for about 20 minutes, you will arrive at the spring water spot called the “Gargling Ground.” 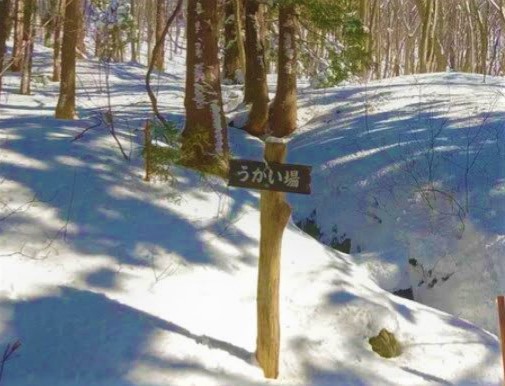 It was winter, so it seemed that there was almost no water.

This place is the junction of the road to the summit and the road to Takiyama Otaki.
From here, follow the road along the river.

Before that, take a break here and rehydrate!
Unlike summer, I don’t really feel it, but I’m sweating unexpectedly, so it’s important to rehydrate frequently.

・ Walk along the river from here

If you follow the road from the Gargling Ground to Takiyama Otaki, it will change drastically.

Climb the steep slope along the river.

Climbing is the hardest at the beginning!
I’m out of breath and I’m worried if I can reach the goal as it is.

However, after a while, I felt comfortable that the energy would come out of my body.
There are some narrow spots along the way, so climb while giving way to the descending climbers.

・Take a break at the Sabo Dam

While using the stock well on the uphill and paying attention to your feet, walk intently.
Then, the Sabo Dam will appear in front of you!

Hope overflows in the voices of friends who say, “You are almost there.”
Take a break while watching the Sabo dam.

I think of the hardships of those who built the dam in the mountains.

The steep slope continues as usual.

Why aren’t we at the ice waterfall yet? !!!
Finally, when the screams in my heart grew louder I was finally able to see the icefall in front of me.

This is the moment when you can forget the pain so far.
This is also the real pleasure of walking in the mountains, isn’t it?

A mysterious figure of pale blue.
The unfrozen waterfall can’t be approached so far, so it’s a special moment only at this time of year!
You will be overwhelmed by a power you have never felt.

The ice waterfall seems to be larger or smaller depending on the climate of the year, but this year (2021) it was growing significantly due to the abundance of snow and cooler temperatures than last year.

・ To the back of the waterfall

I heard that I could enter the depths of the waterfall, so I decided to take on the challenge.
The bottom of the waterfall is covered with ice like a skating rink, so it is essential to have solid anti-slipping gear such as crampons.

There was Fudo Myo-o statue at the back of the waterfall.

Gently put your hands on it as it is said that he is always watching over us in this place.

5. Enjoy the snowfield with snowshoes

I can now return home with a sense of fulfillment.

The climb was steep, so way back was a descent.
There were many slippery areas, so it is safer to have crampons or other anti-slip protection here as well.

I went through the road along the river and came to a place overlooking the West Zao Ranch.

Let’s walk in the snowy field where no one has gone before while enjoying the view of the Yamagata Basin!

It really feels good to walk in the fluffy fresh snow with snowshoes!

Looking back, the contrast between the blue sky and the snowfield with the footprints of snowshoes is beautiful.

It was a good exercise with a break and a little over two hour-round trip.

Finally, I would like to introduce the recommended spots on the way back from West Zao Ranch.

The reward lunch after all that exercise will be taken at Sanbyakubo, which is about 10 minutes by car from the West Zao Ranch.

It has a stately appearance in a historic old folk house.

From the large window inside the shop, you can see the garden of 3,000 tsubo.
It is a popular restaurant where many people from in and out of the prefecture visit because they can enjoy high-quality soba in a quaint and luxurious space.

Crispy tempura and crispy cold soba noodles.
After all, Yamagata soba is excellent! 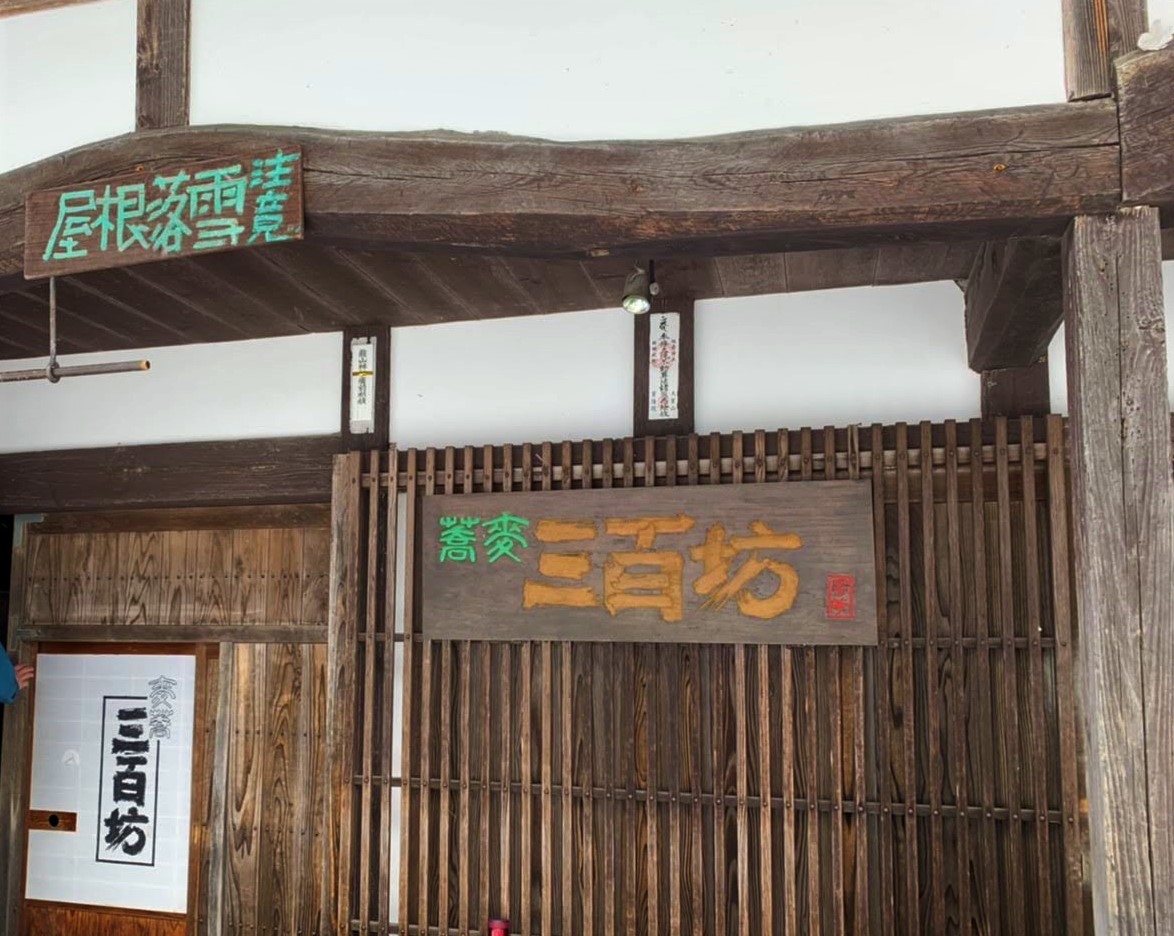 Dessert is also indispensable after meals.
About 5 minutes by car from Sanbyakubo, there is a sweets shop known to those in the know.

The showcase is lined with Sweets.

On the upper left is the Toge Manju, which is also the name of the restaurant, but in fact, this restaurant has another specialty.

These are the weekend-only cream puffs!
This is a limited edition product from October to May.

The summer limited edition is Anmitsu, which is also delicious.

The cream puffs look a little dented in the photo, but there is plenty of custard cream inside! No wonder there are many people who bother to drive up here.

Make sure to take some nostalgic cream puffs and the famous Toge Manju as souvenirs. 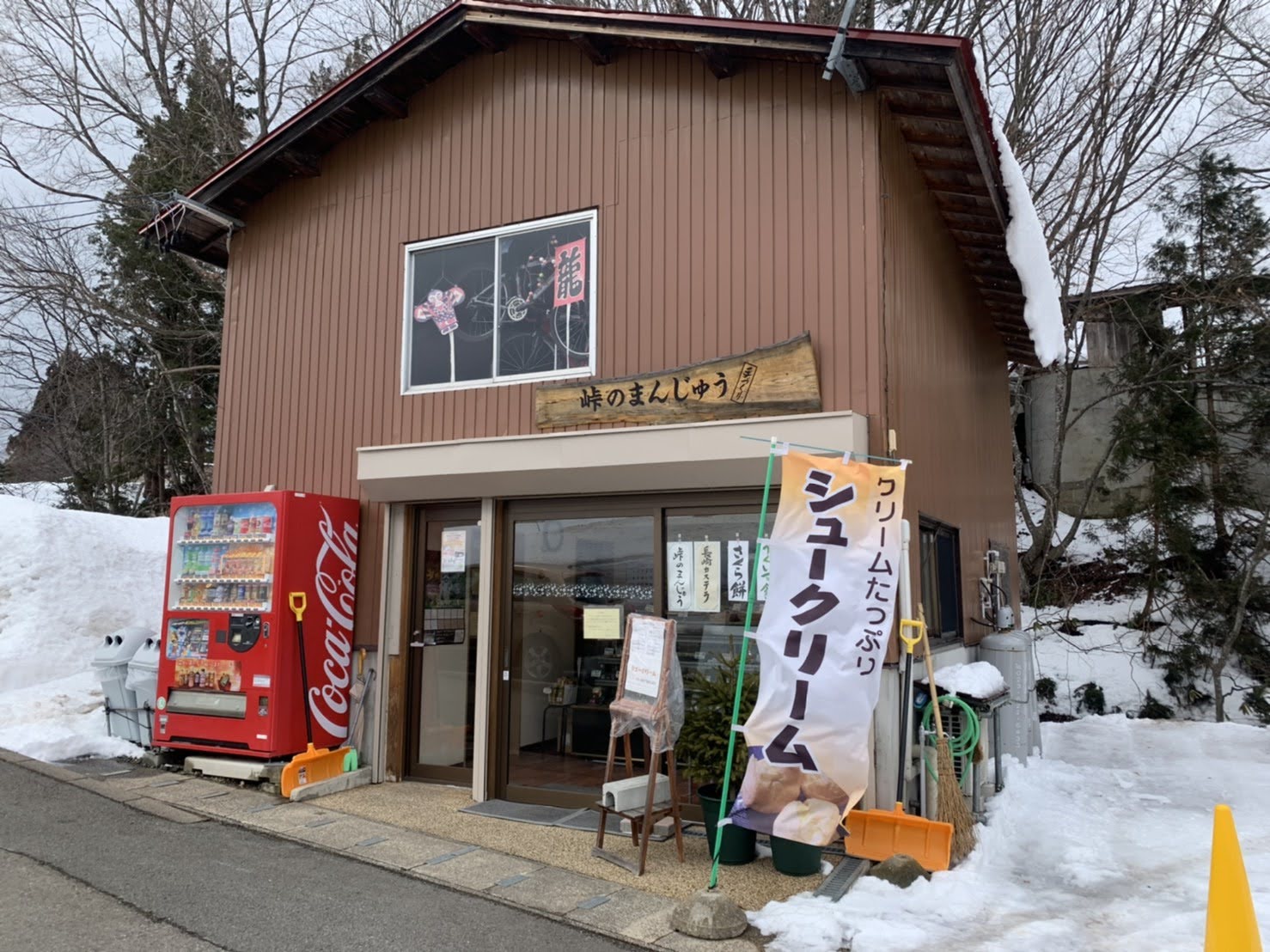 How was it?
An ice work of art that is created because of the severe cold.
Why don’t you come feel its power up close?

◆ The best time to go is from mid-January to late February (depending on the weather conditions of the year)
◆ Because the road to Takiyama Otaki is along the river, please be careful about slipping and avalanches.
◆ Generally, bears are thought to be hibernating in winter, but in recent years some don’t due to a lack of food. Please take precautions such as carrying a bear bell or climbing lively with others. 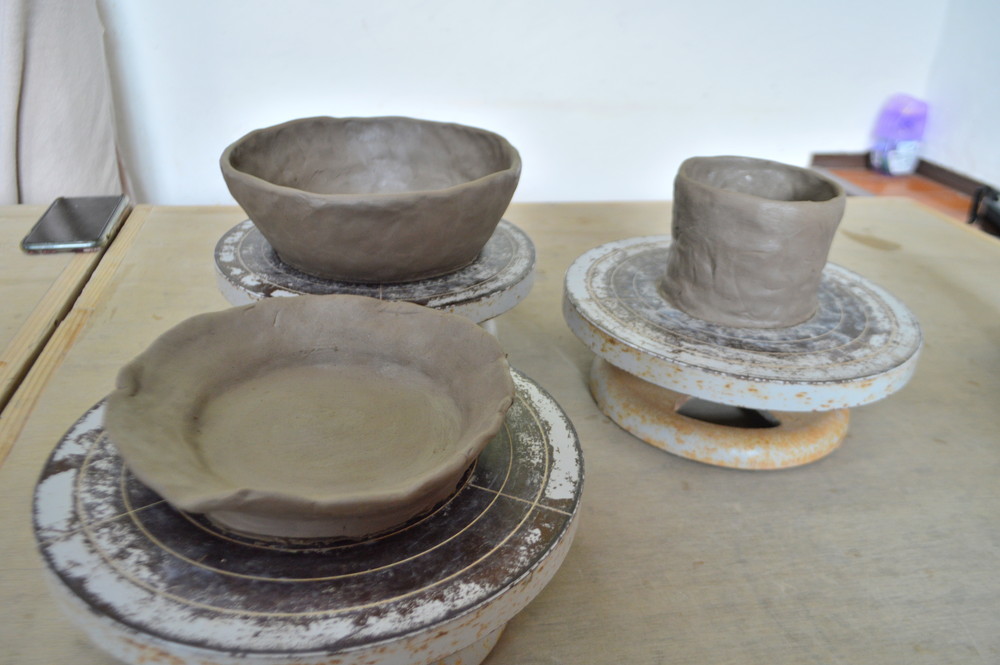 [Feature] Autumn Leaves in Zao! Dokkonuma pond and other spots 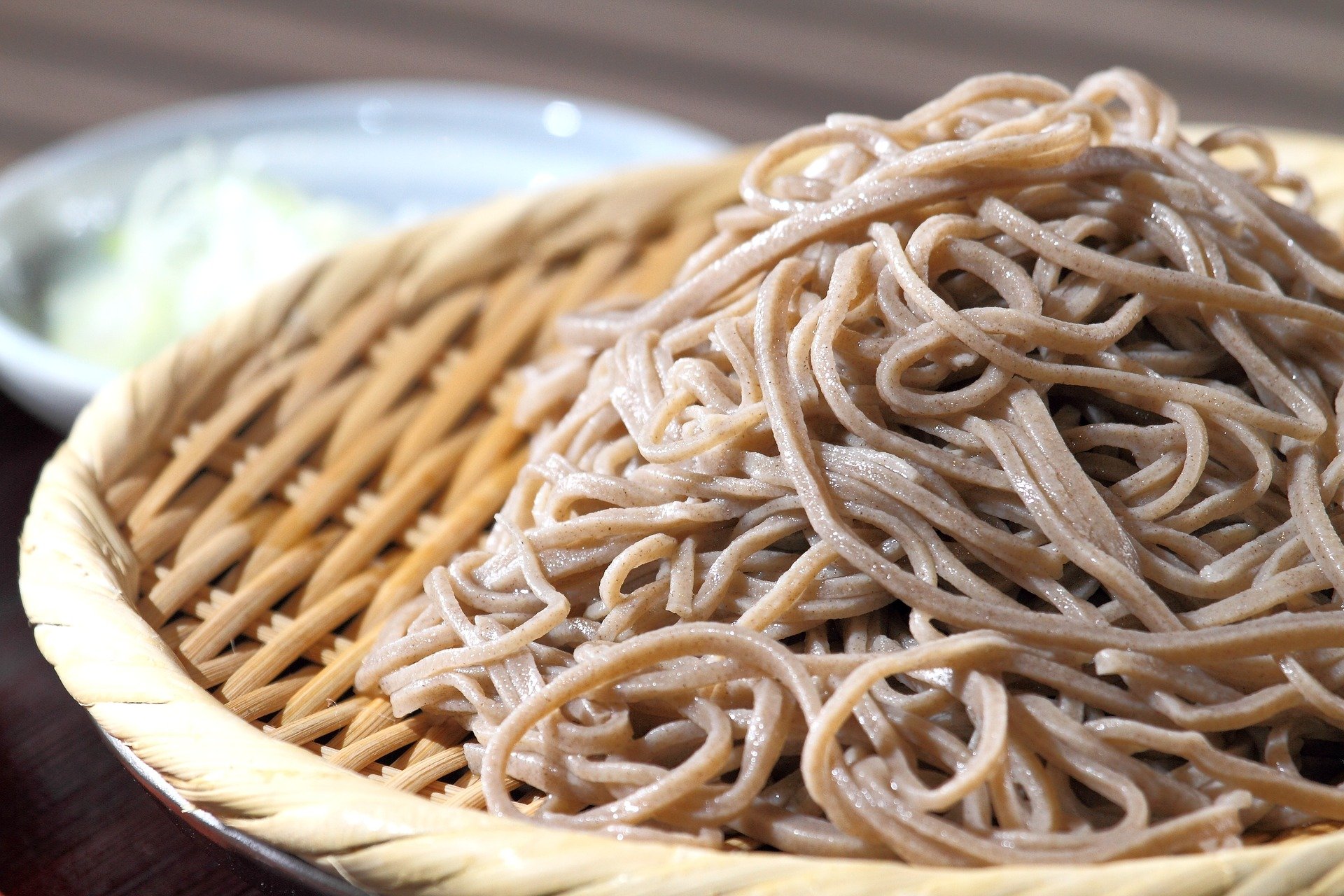